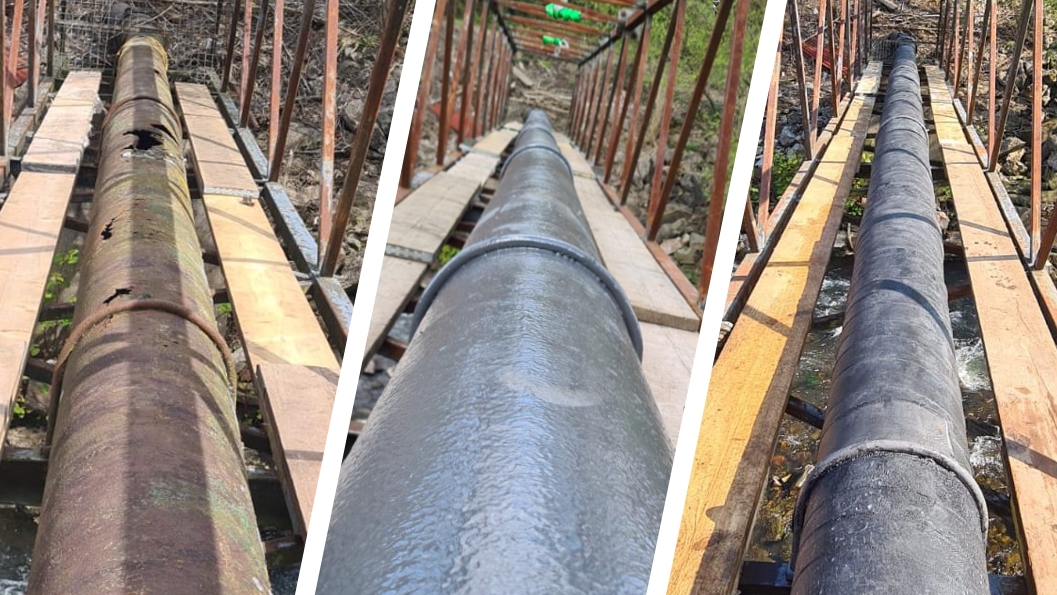 Sylmasta were contacted by Dwr Cymru Welsh Water for advice on repairing and extending the lifespan of a dilapidated pipe bridge crossing the Rhonda River in Porth, South Wales. The bridge was gravity fed and made up of a 300mm diameter, 20 metre long steel pipe rested inside an angle-iron structure for support and protection.

For such a complex project, it was recommended that the four-stage Sylmasta Pipe Refurbishment System be used as a starting point. A final decision on the repair elements required would be decided once the pipe had been fully inspected.

On inspection, the pipe was discovered to be totally covered in corrosion. This had eaten completely through the steel in several places along the top of the pipe, leaving large holes in the brittle surface.

As these holes were too large or delicate to be repaired with epoxy putty, We decided to use fibreglass patches layered over the cracked sections of pipe to seal the leaks. The entire pipe was then coated with Liquid Metal Epoxy Coating.

Liquid Metal is a metal-filled, brushable epoxy. After being coated onto the pipe, it cured to form a smooth, metallic, hard-wearing surface. Several layers of Liquid Metal were used to create an impermeable skin around the original pipe, preventing any further corrosion to the steel and ensuring fluids could no longer escape.

The 90 minute gel time of Liquid Metal allowed significant amounts of epoxy to be mixed without the threat of premature curing. We used a roller to apply each coating to a 1mm – 2mm thickness, also painting with Liquid Metal the corroded steel hoops and beams which held the pipe in place.

To further reinforce the pipe and reinstate its integral strength, it was wrapped with four layers of SylWrap CR Corrosion Protection Wrap. SylWrap CR is a composite repair bandage incorporated with highly effective corrosion inhibitors.

It has been specially formulated for the prevention of corrosion and the protection and strengthening of pipes, metalwork, and other structures in harsh and aggressive environments.

SylWrap CR was applied to the pipe whilst the final coating of Liquid Metal remained tacky. The resin in SylWrap CR was activated with water and the bandage tightly wrapped and smoothed around the pipe.

Within minutes, SylWrap CR cured to form a rock-hard, impact resistant shell around the pipe. The final result was a very smart pipe bridge now well protected from future corrosion and reinforced against breaches by Liquid Metal and SylWrap CR.

If you have an application you would like to enquire about, then please get in touch.